In this article, I discuss several strategies to overcome procrastination and the order in which to use them. 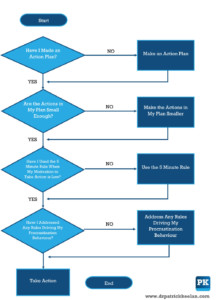 I’ve long been fascinated by the simple but effective way in which flow charts guide a person toward taking the correct action to address a problem. Flow charts I encountered in different jobs before I became a psychologist typically had the person answer a question in a box. A ‘yes’ answer would direct the person to take a particular action and a ‘no’ answer would lead them toward a different action. Continuing to answer questions in boxes and taking the appropriate actions would ultimately lead the person toward the solution of the problem with which they were dealing. This would typically be accompanied by a message in a box reading, “No further action required”.

Procrastination is an issue which is amenable to a flow-chart approach. In the following sections, I will indicate which questions about your procrastination issue you should ask at each stage in the flow chart and the recommended actions based on the answers to those questions. As you will see, these actions involve applying specific cognitive and behavioural skills to address the issue.

Box 1 in the flow chart: Have I made an action plan?

The first question I have my clients ask in addressing their procrastination is: “Have I made an action plan?” If the answer is no, I have them make one. An action plan involves identifying the goal you want to accomplish and the specific actions to move you toward the goal along with specific days and times assigned to take those actions.

Action plans provide a proven-effective antidote to procrastination. I can testify personally to their effectiveness in helping both my clients and me overcome procrastination. For example, at the time of this article I have been successfully implementing an action plan to counteract procrastination on the goal of getting my tax return submitted. As part of the plan, I have assigned specific days to take particular actions toward this goal. Following the action plan has helped me to take those actions so that I am on track to accomplish my goal in a timely manner.

Box 2: Are the actions in my action plan small enough?

An action plan counteracts procrastination by scheduling specific actions to take at scheduled times. However, you may still procrastinate if the actions you schedule to take at a given time are too large. Make the action small enough and you’re less likely to procrastinate. For example, the action plan for getting my taxes submitted involves accomplishing small tasks on specific days such as, “Add up charitable donations for the year” and “Calculate the total for professional workshop expenses”. Remind yourself that taking small steps on a regular basis adds up to significant progress on your goal over time.

Box 3: Have I used the five-minute rule when my motivation to take action is low?

Even if you have scheduled actions to take at specific times and those actions are small enough so as not to be daunting, you might still procrastinate if at a given time your motivation to take action is low. Using the five-minute rule can help you take action at these times.

I have used the rule effectively in implementing the action plan to get my taxes submitted and for many other goals. On most occasions, working on the task for five minutes improves my motivation to the point that I continue past five minutes. In other instances, I have stopped after five minutes and returned to the task later. In each case, the five minute rule has helped me to overcome procrastination resulting from lack of motivation.

Box 4: Have I addressed any rules driving my procrastination behaviour?

If you still find procrastination to be an issue for you after having implemented an action plan with scheduled small actions and having employed the five-minute rule, it may be worth examining any rules or ‘underlying assumptions’ which may be leading you to choose to procrastinate. These rules take the form of benefits you expect to derive from procrastinating along with worries about negative things that will happen if you don’t procrastinate.

For example, some people procrastinate because it protects their self-esteem in case they don’t perform well on a task. That is, it gives them a built-in excuse for a bad performance which lets them avoid attributing the poor performance to their own lack of ability. This benefit can be summed up in the thought, “It’s true I didn’t do well but I would have done great if I hadn’t procrastinated.”

Identifying rules such as these which motivate procrastination can help you to recognize that there are often good underlying reasons for this behaviour despite its obvious downsides. Once you’ve identified these rules, you can work toward finding ways to address them without needing to procrastinate. In the scenario I described, for example, it would likely be helpful to work on helping the person build their self-esteem so that they can still feel good about themselves when they experience a bad performance and have not procrastinated leading up to it. 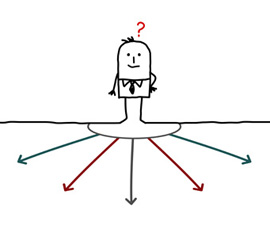 The flow-chart approach to procrastination: Some final words

In summary, if you’re procrastinating I recommend that you follow the flow-chart steps in the order I presented them. In true flow-chart fashion, if you can address the issue using the first step then no further action is required. In other words, there is no need to delve into rules which may be motivating your procrastination if you are successful in addressing the issue by using an action plan. Only implement further steps if you have failed to address the issue with the steps you have tried.

You may find it helpful to work with a psychologist with a background in cognitive behavioural therapy (CBT) when implementing the steps and strategies discussed in this article. They can be used when the focus is on procrastination or when this issue relates to another one such as may occur in depression counselling or anxiety counselling. Based on my work as a Calgary psychologist and a Cochrane psychologist, I can personally vouch for the effectiveness of these skills in overcoming procrastination.

May your flow chart lead you to overcome procrastination,