How to respond effectively to criticism: Part 2—When to respond

How to respond effectively to criticism: Part 2—When to respond

In this article, I discuss how to choose the best time to respond to criticism.

In my last article, I indicated that an effective response to criticism involves three elements: what to say, when to say it and what to think. After doing so, I discussed the first of these elements—what to say. In this article, I will focus on the second of these elements—when to give your response to criticism. As was the case with the ‘what to say’ response element, the ‘when to say it’ element partly depends on whether the criticism you are responding to is constructive or nonconstructive.

If you choose to respond to criticism, a primary consideration should be to deliver your response in a constructive manner. In some cases, this might involve acknowledging valid points made in the criticism. In other instances, it may entail defending yourself against the criticism if the facts warrant it.

In each case, your points in response are more likely to be heard by the criticizer and others if you deliver them constructively by sticking to issues, facts and arguments. If instead you respond non-constructively by attacking the criticizer with insults and negative references to their character, any valid points you make in response are unlikely to be heard. They will be drowned out by the negative manner in which you’ve delivered your points.

How to decide when to respond: Use the traffic light analogy

In the green light state, you are typically feeling relaxed, are in a good mood and are experiencing good thoughts. When you are on red light, it is just the opposite. You are likely to feel tense in your body, experience negative mood states like anxiety, frustration, anger and/or depression and you will likely have negative thoughts running through your mind. These could be negative thoughts about yourself, about other people, about how others feel about you, and thoughts focused on worries–to name a few examples. 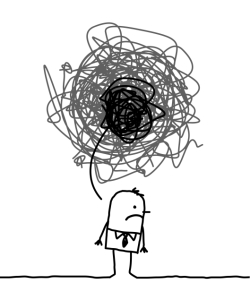 There are two considerations in deciding whether you are on red or green light and, in turn, whether it is the right time to respond to criticism.

1. How you are feeling at the time you are criticized—If you are feeling a lot of stress from one or more sources (such as work, relationships, finances, and driving) or if you are hungry or tired, you are likely to be on red light and it is not the right time to respond to criticism. If on the other hand your stress level from various sources at the time of the criticism is relatively low and you are neither hungry nor tired, then you are likely on green light and it would be the right time for you to respond to criticism;

Delaying your response is recommended whenever the criticism is nonconstructive regardless of whether you were on green light just before the criticism was delivered. I recommend delaying your response in these instances because nonconstructive criticism is likely to send you to red light. That is, insults and/or attacks on character will usually produce negative thoughts accompanied by strong emotions and physical tension—the defining characteristics of being on red light.

In my next article in this series on responding to criticism, I will discuss the third element of an effective response—what you think. How to respond effectively to criticism is one of many skills I help my clients learn in my work as a Calgary psychologist and a Cochrane psychologist.

May you choose the right time to respond to criticism,