In this article, I discuss what features of the program couples should and should not follow when discussing their issues.

In my work as a Calgary psychologist and a Cochrane psychologist, I sometimes help clients by referring to material in the media such as television, radio, books, and the internet. A television show I often discuss when helping couples with constructive communication is the CNN program Crossfire.

Crossfire was a political program which originally ran from 1988 until 2005 and then had a brief second run between 2013 and 2014. It featured discussions of issues among commentators ‘from the left’ of the political spectrum—typically strategists from the Democratic Party of the United States—and those ‘from the right’—usually Republican Party masterminds.

As I watched Crossfire, I could not help but compare the communication strategies used by program participants with those used by clients with whom I was working in couples counselling. I concluded that there were some positive communication strategies displayed by those on the show which would contribute to positive relationships along with some nonconstructive ways of communicating which would be detrimental to couples who employed them.

In the following sections, I will point out patterns of communication on Crossfire which would be good for couples to emulate and other communication techniques which they would be better off not following.

First the good: Here are some constructive communication patterns on the show which I encourage couples to follow:

1. Stick to the issue at hand. On the show, the commentators from both sides did a good job of sticking to the issue under discussion. Veering off into issues not on the agenda is a common mistake among couples which makes it difficult to work through issues.

2. Avoid making personal criticisms and name-calling. Crossfire participants also did a good job in avoiding ‘getting personal’ while debating topics. Couples who make personal criticisms and name-call not only have great difficulty in working through issues; they also inflict damage to their relationship friendship so that their relationship further suffers.

3. Keep nurturing your relationship friendship even if you haven’t resolved issues. Speaking of the relationship friendship, I was pleasantly surprised by the behaviour of the show’s commentators toward each other near the end of an episode after having disagreed strongly on issues throughout. Despite the often heated nature of their disagreements, participants from the left and right would typically smile at each other and chat amiably as the credits rolled.

Clearly they did not take personally their disagreements on issues nor let them interfere with liking each other and being friends. There was even a Democrat-Republican married couple who appeared on the show while advocating opposite sides of the issues.

In contrast, too often I encounter couples who let the presence of disagreements on issues lead them to decrease or eliminate their time spent connecting with each other in friendship activities. Follow the example of Crossfire participants and keep these friendship activities going regardless of whether you have resolved your issues. 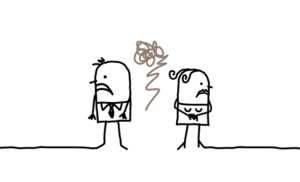 Now the bad: Here are some nonconstructive communication patterns on the show which I do not encourage couples to follow:

1. Speaking in a disrespectful manner. Although respectful in avoiding name-calling and personal criticisms, the opposing parties on the show were still disrespectful by often raising their voices and telling their counterparts that they were wrong. Couples who keep their voices down and who let their points speak for themselves are more likely to have their partners listen to them and address their concerns.

2. Not listening to each other. Each party on Crossfire did little listening while the other party was speaking. This was evident by their usual responses of rebutting, contradicting and even interrupting the other party. To facilitate effective listening, I often have couples with whom I work take turns being the speaker and the listener so that the speaker has a chance to express their thoughts and feelings in depth. In turn, this gives the listening party the sole task of understanding their partner’s thoughts and feelings regarding the issue at hand.

May your relationship communication only partially get caught in the Crossfire,