How to deal with difficult people: Use strategies from cognitive behavioural therapy

How to deal with difficult people: Use strategies from cognitive behavioural therapy

In this article, I discuss ways of thinking and behaving which can make it easier for you to deal with difficult people.

In my work as a Calgary psychologist and a Cochrane psychologist, I sometimes have clients who have who want help in dealing with difficult people. The people in question could be friends, co-workers, family members, supervisors or intimate relationship partners, to name a few.

The problem of dealing with such people is often tied to clients being required to interact with them—sometimes on a regular basis. Given that a significant amount of your time is consequently occupied in interacting with people you find unpleasant, it is important to have strategies to decrease this unpleasantness and thereby make dealing with such people more manageable. In the following sections, I will discuss such strategies offered by cognitive behavioural therapy (CBT).

Minimize your time with the person

One behavioural strategy is to minimize the amount of time you spend with the person. In some instances, you may have control over this. Spending less time in the person’s presence should result in your enduring less stress as a result of interacting with them.

Set boundaries with the person

Setting boundaries when the difficult person behaves in an inappropriate or disrespectful manner toward you is a second behavioural strategy. Bringing the matter to their attention or to someone else who may be able to hold them to account can result in such behaviours occurring less frequently. In turn, this will make it easier for you to interact with the person going forward.

Even if they are not held to account for the inappropriate behaviour and even if they do not take ownership of their actions, setting boundaries is often still a good idea. Doing so will contribute to your maintaining your self-respect and self-esteem despite having to deal with a difficult person. In turn, this will make interacting with them more tolerable.

Having said that, please note that in some instances it may be wise to refrain from setting boundaries with difficult people because of the likelihood of significant negative consequences. This would include interacting with an abusive partner or with a supervisor in certain work situations.

Build connection with the person

If it is possible to build connection with the difficult person through informal positive social interaction, it can be much easier to deal with them. So even though taking steps to get to know this person may be an unenjoyable prospect, it may be worth pursuing this strategy if circumstances permit. In some instances, you may even be pleasantly surprised to find that a good person exists underneath the difficult one.

Communicate constructively with the person

As tempting as it may be to deal with difficult people by communicating in a non-constructive manner toward them or about them, doing so is likely to make things worse for you. Staying constructive in the way you express your concerns gives you the best chance to address their bothersome behaviours. It also allows you to regularly set boundaries. As I mentioned, this will make interacting with the person more tolerable.

In some instances, ending all interactions with the person may be necessary if circumstances permit. This would be a step to consider if you’ve tried all the strategies I mentioned with little to no success. If that is the case, it may not make sense to continue to expose yourself to a person who adds significant stress to your life and in whose presence it is a challenge for you to be in a good mood. 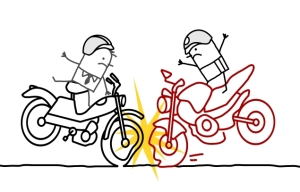 The meaning that we attach to our interactions with a difficult person can add to the distress we experience. To address this side of the challenge, CBT offers cognitive strategies which focus on changing how you feel by changing the way you think.

Even though there is typically ample evidence of the difficult person behaving in an inappropriate manner at times, there may be other instances in which there is at least some evidence that the person is behaving appropriately.

Doing so will help you to reduce the intensity of the stress, frustration and anger you experience when interacting with them on these occasions. In other words, pay attention to the evidence rather than letting your view of them as a difficult person skew your interpretation of their behaviour.

When the person behaves in a manner which upsets you, your degree of upset will be increased if you do not address general negative thoughts which you are likely to have at these times. These general negative thoughts typically fall into two categories: (1) Negative beliefs about the person’s character such as ‘He’s selfish’ or ‘She’s mean’; and (2) Negative beliefs about how the person feels about you such as ‘He doesn’t care about me’ or ‘She doesn’t respect me’.

Changing the general negative thoughts into balanced thoughts when you encounter negative behaviours will help you to experience less intense stress, frustration and anger when interacting with a difficult person.

In order to implement the strategies in this article, you may find it helpful to work with a psychologist who specializes in cognitive behavioural therapy.

May you use strategies to make dealing with difficult people less difficult,