How to enhance your performance in front of an audience: Use the social facilitation effect

How to enhance your performance in front of an audience: Use the social facilitation effect

In this article, I discuss how you can channel your nervousness in front of an audience into a tool which can spur you to better performances.

In my work as a Calgary psychologist and a Cochrane psychologist, clients sometimes seek my help in being able to perform effectively in front of an audience. This issue is relevant to clients who engage in activities such as public speaking, acting, singing, music and sports, to name just a few endeavours which can involve public performing.

These clients often seek help in coping with nervousness they experience when performing in front of audiences, citing instances in which they performed poorly and even ‘choked’ as a result of the pressure they felt from having people watch them perform. In helping these clients, I raise with them the possibility that applying psychological skills and knowledge may not only help them to perform well in spite of an audience watching them, it may actually spur them to a better performance.

This notion is referred to in psychological research as the ‘social facilitation effect’. In the following sections, I will explain this concept and discuss how you can use it to enhance your performances in front of audiences.

How the social facilitation effect works

In answering these questions, people can typically cite examples in which an audience benefitted a person’s performance—such as an athlete setting a world record in front of a large crowd—along with instances in which the audience played a key role in a person’s subpar performance—such as a figure skater making mistakes in routines in front of an audience which they performed flawlessly in practice with few people watching.

But what does the research say? Studies indicate that one cannot make a blanket statement that performing in front of an audience has either a good or bad effect on a person’s performance. Instead, whether the audience has a good or bad effect depends on certain factors. I will next explore one of these factors which can determine whether the audience will spur you to a good performance or have a detrimental effect. I will also suggest ways you can use this knowledge to your benefit when you find yourself having to perform in front of an audience. 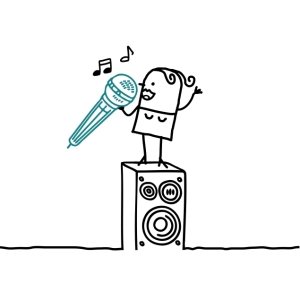 How simple or well-learned the task is which you’re performing: A determining factor in the effect

Research indicates that how simple or well-learned the task is which you are performing is a determining factor in whether the audience will spur you to a good performance or cause you to perform poorly. Specifically, if a task is simple or well-learned as a result of practice, then you are likely to perform better with an audience watching you than when you perform privately. Conversely, if the task is difficult and you have not learned it well, then the audience is likely to have a negative effect on your performance.

The defining research study which supported this notion featured two groups of pool players. One group was comprised of experts and the second group had participants who were new to the game. Both groups shot pool in two conditions–alone in a room and with observers watching them. The results were that the experts performed better with people watching them compared with alone while the novices’ performances worsened when the audience watched them compared with when they shot pool with nobody watching them.

The pool study nicely demonstrated the effect of task simplicity and learning on whether the audience will have a positive or negative effect on performance. For the expert players, the task was simple or well-learned. Thus the audience led them to perform better than when they were shooting pool with nobody watching them. For the novice players, the task was difficult and not well learned and thus the audience led them to perform worse than when they performed with nobody watching them.

Why does an audience improve performance of simple and well-learned tasks?

The second point is that, when you perform, the physical arousal you experience can come from two potential sources. One source is the task itself. Simple tasks or those which are well-learned through practice lead to little physical arousal while performing because you do not need to engage in much thinking about the task while you are doing it. Difficult tasks which are not well-learned, on the other hand, lead you to have more physical arousal while performing them which stems from having to think about how to perform the task while you are doing it.

Applying the notion of optimal level of arousal to performance, the reason an audience leads to better performances for simple and well-learned tasks but results in a decline in a performance for difficult tasks which are not well-learned is as follows: For simple and well learned tasks, there is little arousal present so that when people perform these tasks alone, their performance is sub-optimal because there is no arousal coming from either the task source or the audience source—that is, they are below the optimal level of arousal. When people perform simple or well learned tasks in front of an audience, their performance improves because the addition of arousal from the audience gives them just enough arousal to perform at their optimum. This explains why the expert pool players did better with an audience watching them than when performing alone.

On the other hand, for difficult tasks which are not well-learned, performance is already at the optimum when you are doing the task with nobody watching you because you have arousal from the task source. When you perform a difficult task which is not well-learned in front of an audience, your performance suffers because you have arousal from both the task source and the audience source. That is, arousal from both sources leads you to have to too much arousal to perform at your best. This explains why the novice pool players did worse with an audience watching them than when performing alone.

The primary lesson from the points I’ve discussed is to make it a point whenever you have to perform a task with people watching you to practice the task if it is difficult until you have learned it well. Examples include practicing your dance routine, your lines in a play or the content of your speech.

If you have learned the task well through practice, you will minimize the arousal you experience from the task source. When you then experience physical arousal from the audience, you should welcome it rather than interpreting it negatively as nervousness which will cause you to perform poorly. Instead, you should look forward to just the opposite result because experiencing arousal from the audience source while not experiencing it from the task source will likely result in your being close to your optimal level of arousal while performing.

A word of warning: Beware if you have to perform a difficult task in front of an audience which you have you have not learned well through practice. In such an instance, the physical arousal you experience from having to think about the task while performing combined with the arousal you experience from the audience source will likely lead you to perform poorly because you have too much arousal while performing.

The bottom-line message: If you have to perform in front of an audience, the three most important things to do are 1. Practice; 2. Practice; and 3. Practice.

May you use the principles of social facilitation to enhance your performance,