Two elements of leadership: Both are essential in a crisis

Two elements of leadership: Both are essential in a crisis

In this article, I discuss the importance of both task-focused and relationship-focused leadership in helping the people being led during a crisis.

When I was in graduate school, one of the most fascinating projects I worked on was a class presentation on different styles of leadership. Research led me to conclude that there are two main styles of leadership. One is task-focused leadership which entails guiding the group you are leading toward the accomplishment of tasks. The second is relationship-focused leadership which concentrates of fostering good working relationships among the group members as well as between them and the leader.

The importance of these two leadership styles is evident during the current coronavirus pandemic. In the following sections, I will discuss the benefits of each style during the crisis.

Task-focused leadership facilitates people taking action to make progress toward a goal or toward solving a problem. For example, New York Governor Andrew Cuomo’s daily news briefings are filled with various actions he and others are taking and recommending that New Yorkers take to help his state limit the spread of the coronavirus and to get the state’s economy back on track in a safe manner. During this crisis, having task-focused leadership has been essential to a state, province or country addressing this enormous challenge.

Relationship-focused leadership fosters good morale among the people being led and good relationships among members of the group. It also engenders likability and respect toward the leader which makes it more likely the group members will want to take the actions recommended or assigned by the leader. Displaying empathy and encouragement toward others is fundamental to this element of leadership.

This element of leadership was exemplified by the inspirational messages of British Prime Minister Winston Churchill during World War II, the ‘fireside chats’ delivered over the radio to Americans by President Franklin Roosevelt during the Great Depression and the subsequent Second World War, and U.S. President John F. Kennedy’s iconic 1962 address to Americans in which he set the goal of landing on the moon by the end of the decade,

A more recent example of relationship-focused leadership was U.S. President Bill Clinton. His ability to connect with people played a major role in his success as a campaigner in two consecutive election victories.

During the coronavirus pandemic, Governor Cuomo’s daily news briefings have not been comprised solely of task-focused material. They have also featured many relationship-focused messages in which he has empathized, encouraged and inspired New Yorkers during this stressful period. 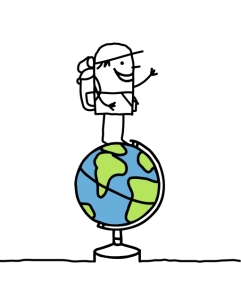 The need for both elements of leadership

There is typically the need for both task-focused and relationship-focused elements to be present for a leader to be successful. Having said that, there have been many examples of successful leaders who were clearly stronger in one of the two elements.

Former Canadian Prime Minister was strong in task-focused leadership with a hands-on approach to getting policy enacted in which he knew the files of his cabinet ministers like the back of his hand. This strength allowed him to win three elections before his shortcomings in the relationship-focused area played a central role in his loss in the 2015 federal election.

At the other end of the spectrum, U.S. President Ronald Reagan’s leadership approach was the opposite of the ‘policy wonk’ task-focused style exemplified by Prime Minister Harper. However, his giftedness in the relationship-focused element allowed him to achieve two landslide election victories and whose Presidency is regarded by historians as among the most successful. ‘The Great Communicator’ label he earned was exemplified in iconic moments of connecting with the American people. This ability was evident in the wake of tragedies like the Challenger Shuttle explosion and in triumphs such as the end of Soviet rule in Eastern Europe (“Mr. Gorbachev—Tear down this wall!”).

Those leaders like Prime Minister Harper and President Reagan who succeeded primarily because of strength in one of the two elements of leadership were able to do so partly as a result of the public forgiving their shortcomings in one element because their ability in the other element was so impressive. In addition, a leader can compensate for their relative weakness in one of the elements by having people around him or her who are strong in that element. For example, President Reagan was surrounded by advisors who were strong in task-focused skills.

Having said that, it is wonderful to encounter a leader like Governor Cuomo who makes a point to pay attention to both the task-focused and relationship-focused elements of leadership. He clearly recognizes that the people he is leading are more likely to ‘follow’ if they see him making an effort to address both elements.

The effectiveness of Governor Cuomo’s dual-pronged approach to leadership is readily apparent. That is, he has received very high approval ratings of his leadership by New Yorkers throughout the pandemic. In addition, although the facts indicate that he (along with many other leaders) did not recognize the crisis as early as he should have, once he did so his strong leadership in both elements led to most New Yorkers taking the actions he advocated. This resulted in a level of containment of the spread of the virus found in few other states.